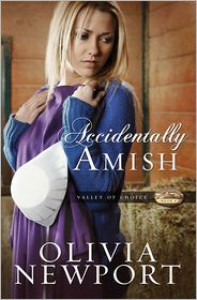 Escape the helter-skelter of the modern culture and join software creator Annie Friesen, hiding at the home of an Amishman. With her high-tech career in jeopardy, Annie runs from fast-paced Colorado Springs—and straight into the hospitality of San Luis Valley’s Amish community. There she meets cabinetmaker Rufus Beiler, and the more time she spends with him, the more attracted she becomes. When Annie finds she shares a common ancestor with Rufus, she feels both cultures colliding within her. But is her love for Rufus strong enough for her to give up the only life she’s ever known?

This felt confusing, not gonna lie. It’s four stories combined into one and the only thing really holding it together is their family tree, one of the stories taking place in the 1700s, which made it feel a bit…I don’t really know what the word is, but longer than necessary, I suppose. Then there was the fourteen different ways of spelling Beiler. It was also very stilted in writing, kind of like like the British or a robot or a British robot. Except for “I’m” there were no contractions, which you could expect from the Amish, but it’s everywhere and everyone, from the Amish, to the English, to the descriptions. It was “do not” instead of “don’t.” Which is fine, but when there’s one on every page, you start to pick up on it. It just doesn’t feel natural. Despite all of those things, I enjoyed it. I will most likely be finishing the series.